Hasbro introduced this brilliant product into the Nerf world in June 2020 and single-handedly changed the entire game of blaster guns. The Nerf Fortnite BASR-L is a blaster that can be easily taken as a sniper rifle. It has a bolt-action mechanism and its unique design and brilliant manufacturing make it stand apart from its counterparts.

The sniper rifle is equipped with a modest 6-dart clip and a large scope – all ensuring that the player has a great time in the arena; defending himself from the opponents while simultaneously targeting that and winning the game.

If you are into bright colors, then this blaster is definitely for you. Another good point is that if you share the love for Fortnite as the blaster is based on the Fortnite theme. You can have fun with your friends and create memories while pretending to be inside a Fortnite show.

My experience with this blaster so far has been great and I love its bright color and the accuracy with which it resembles the Fortnite guns. In the following section, I am going to write a detailed review of Nerf Fortnite BASR-L for you to learn in detail about this gun.

If you find the features and details of this blaster gun tempting, you can either order it from Amazon or purchase it from any nearby toy store.

Scroll down to read more about the product.

Why should you buy this blaster?

Given all the great qualities of this Nerf gun, and especially the Fortnite theme; you must buy it if you want to experience greatness in your backyard on a weekend and want to create tons of memories with your friends or family members.

Hasbro has done a great job by adding one more sniper rifle-style blaster to their Fortnite addition. They have created this entire range of amazing blasters in collaboration with Epic Games and their sole goal was to promote the game Fortnite which is played online.

The Nerf Fortnite BASR-L is called BASR because it is a Bolt action sniper rifle. It can be activated into a Battle Royale game mode during the game and can be used brilliantly against opponents. To say that it is one of the best blot-action blasters will not be wrong.

Players can operate this blaster in two modes: slam fire mode and single fire mode. The blaster mainly comes in two colors: bright yellow and orange. The main reason for these two core colors so this Nerf Fortnite BASR-L falls in the category in which other Fortnite Legendary rarity-type blasters fall. this also explains the L in the name of the blaster.

As I mentioned earlier, this Nerf blaster has a 6-dart clip so the player does not have to fret about loading or reloading the darts during the game. Because once the player has loaded 6 darts, he or she is all set to play the game for a long time.

However, the only darts this blaster supports are the elite darts that are available in the package. This is also great in the sense that you do not have to worry about separately buying the darts for the blaster. When you buy this Nerf blaster BASR-L, you get 12 elite darts in the package.

Main features of the BASR-L: 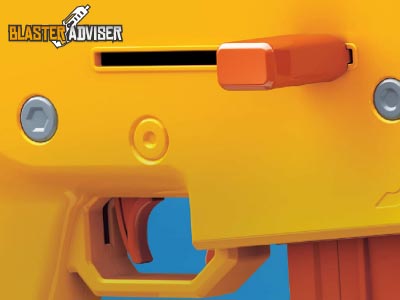 The main features of the BASR-L blaster that I like and for which I strongly recommend this blaster are explained below:

The Nerf Fortnite BASR-L has a sniper look. This is because the blaster has a long barrel, that is equipped with a scope at the top. The blaster comes with a shoulder stock, that provides convenience and eases the players while running and chasing opponents in the gaming field.

There are two priming handles on both sides of the long barrel, and by only these features you can realize that this blaster gun has all the main features players usually look for while choosing a blaster. Therefore, if you are looking for a blaster that has a sniper feeling or looks, then this is the right product for you.

It is important to mention that the stock and barrel of the blaster are fixed to the main blaster body so you cannot detach or remove them. Moreover, there is no way you can replace both these parts or use them in some other blaster. You can only use it the way it is.

The dart magazine of the blaster that can hold up to 6 elite darts is the standard design and style S-Strike magazine – which means it is outstanding in its quality and performance. But also due to this reason, you cannot use this magazine with any other blaster.

But this is not strictly the case another way around. The way the magazine well is designed in the Nerf Fortnite BASR-L, any other magazine can fit well into the blaster. But not all magazines can fit into the blaster which can also be considered as a flaw. 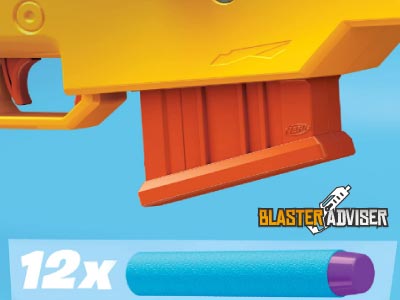 If you truly want an experience full of fun and excitement, again, this is the best blaster for such activities. Whether it is loading, priming, or firing – the fine performance and great quality of this blaster ensure you have phenomenal experience in all of these steps.

As mentioned previously, this blaster has a great sniper look and even is built like one, so the great loading and firing mechanism falls in perfect alignment with that.

Next comes the shooting range of a blaster. Nerf Fortnite BASR-L excels at even this one step. Its shooting speed is 75 feet per second, which is a great speed for any Nerf blaster. Its firing velocity is almost the same as its firing range i.e. maximum of 70 feet per second. Both these speeds are on par with the N-strike blasters. So once you have bought this blaster, you shall never feel like you are missing out on something or having less fun than you could have with some other blaster.

However, always be mindful of the fact that all blasters do not perform similarly and there is always some flaw in one model that is absent in the other one. But that negates the whole purpose of fun if you delve into the intricacies of blasters too much.

But if we closely analyze the performance and quality of BASR-L, then we can surely say that it is indeed one of the best Nerf blaster guns. It is specifically designed to be a fun blaster, you can say that even after having one game with it. But also keep in mind that its primary purpose is fun and it is not a sharp shooting machine that is destined to make you win all the Nerf blaster shooting games.

As I mentioned earlier in the review guide, you can use the fire mode of this Nerf blaster in two ways: the slam fire mode and the single fire mode. Nerf Fortnite BASR-L is pro at both these modes. But this does not mean that being pro at the available firing modes implies that the blaster has no downside.

You can operate this BASR-L on a single fire mode as well as the slam fire action. The single-fire mode usually works well for sniper rifle-style shooting as is considered normal and is easy to manage as well. But when you switch to the slam fire action, it might cause you some trouble.

A blaster like this, which is built for fun and not specifically sharp shootings, does not perform well in slam-fire action mode. Moreover, it conflates with the sniper feeling that this blaster is supposed to give off. But simultaneously, this is a very fun feature to have and looks cool as well.

This point of mine does not mean in any way that the poorly performing slam fire action takes away all the fun of the blaster because it does not at all affect the quality of shooting or the number of fun players can have in the arena with this blaster. Nevertheless, this is one flaw that I found in this blaster and have mentioned it here so my review of BASR-L gets as honest as possible, and you can make a completely independent decision of buying it.

As I mentioned in the intro of this guide, it has been an absolutely fun experience to play with this Nerf blaster and I always make great memories in the arena with it. It is a fun blaster that even using it feels like what did the manufacturer make it for?

The single-fire mode is great, it functions smoothly and you can chase your opponents with ease and even take them out. But the slam fire action is not as good and is a bit poorly designed. This is one considerable flaw in this Nerf machine.

The dart magazine is fine in my opinion as it can hold 6 darts at once, but many people prefer magazines with a larger capacity. However, I do not consider it a flaw as I am fine with it. So this is my review of this blaster; I hope you enjoyed reading it and that it helped you make up your mind about this product.

Do let me know in the comments what you think about it and what color you plan to purchase. 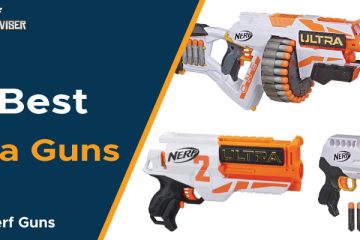 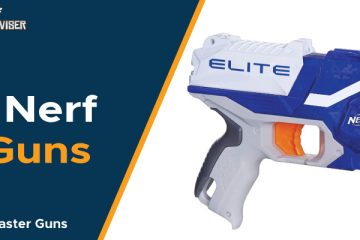