Nerf Rival Hades was released on 18th September 2019. Since its release, it has taken the blaster world by storm as it excels in quality in performance than all its predecessors. Hasbro has worked a great deal on this Nerf blaster that is robust and so easy to handle that the player does not have to worry about handling the blaster while running and can only focus on the game.

I have been playing with this Nerf gun right from the time it came out, and I am delighted to use it and impressed by its unique design. It is due to this impression that I am going to write a detailed review about this Nerf blaster in the following section, which will also help you learn about the product in detail which will help make up your mind about its purchase.

Why should you buy this gun?

There are numerous reasons for purchasing any blaster gun. Mostly, it is the functioning of the product. If it functions smoothly then normally it is liked and preferred by the players.

Likewise, there are countless reasons to purchase the Nerf Rival Hades. It includes all the latest features that make it advanced as compared to its peers and ensures that you beat your opponents in the arena by being swift and alert. 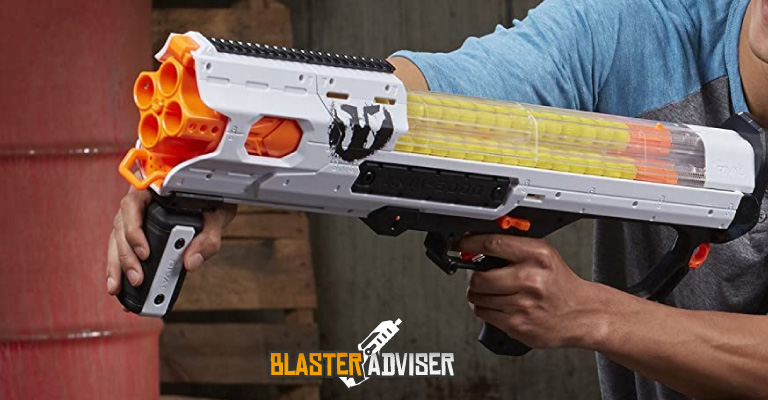 The Nerf Rival Hades comes with great qualities and up-to-date features. It seems like the manufacturers had done great research while designing it to make sure the product they were going to introduce in the market will stay up to the mark even in the years to come.

In the following section, I am going to compile some of the main features of this amazing product and the rest is up to you whether you find it worthy to be purchased and played with or not. 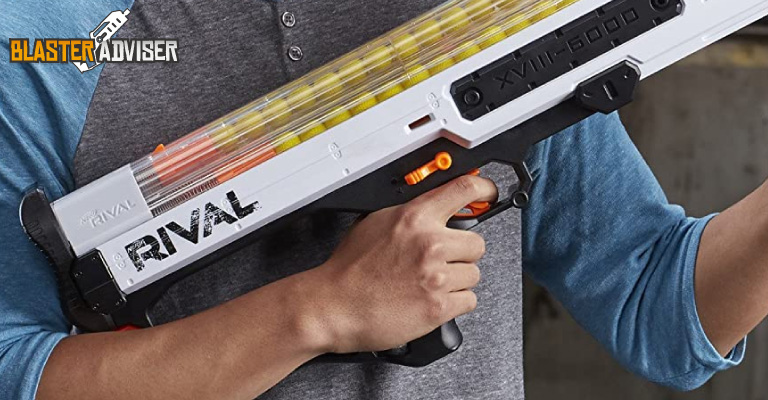 Although the Nerf Rival Hades is similar in its shape and functioning to its precursor the Nerf Rival Artemis, it differs in size. It can be regarded as a medium to large-sized blaster gun that is equipped with a great capacity magazine. The magazine is in-built and can hold up to 60 rounds. This gives the player power over his rivals in the arena which ultimately ensures his win.

Moreover, the blaster has two modes for blasting: slam mode and single mode. Both modes are spring powered so you have to worry about exerting too much power while blasting the darts.

This also increases the thrill of the game and players’ interest and engagement in the game.

As I mentioned before, the magazine of the blaster can hold up to 60 rounds and it is of integrated nature. The Hades magazine is named after a Greek God, and it is as unique and great in design and functioning as any other feature of the blaster.

The integrated magazine has two straps and both are different in colors: red and blue. This feature is helpful in the regard that if you want to play in opposing teams, then you can differentiate those teams with different colors as per the magazine straps.

It is because of these long tubes that Nerf Rival Hades is large.

Functioning of the Magazine: 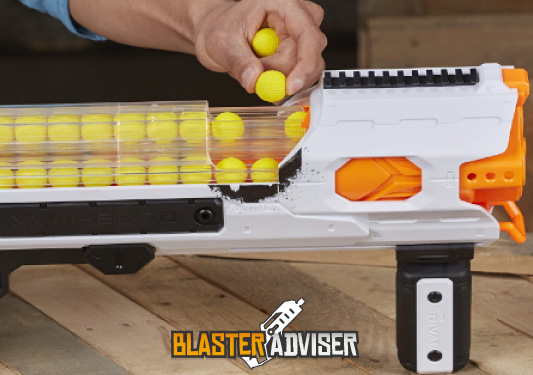 Although the main magazine is composed of three distinct magazine tubes, they are really easy to operate. Loading rounds in these three tubes does not take too long if you learn the technique.

There is a slider at the top of the magazine and you just have to use it to get access to the slots of the three tubes. As the three magazine tubes are separate and cannot be removed or separated, they have to be loaded individually as well.

Last but not least, whereas the loading technique is quite easy, the entire process takes some time as there are three tubes needed to be filled. Numerous other Nerf blasters are easier to load because of small magazines or their compressed sizes but the Rival Hades take some time during the filling process.

All the Nerf blasters are slightly different in their functioning especially if they have a pump-action mechanism. Some pump actions are efficient and swift, while others take some time and some can be a bit hassle to work with.

But the Nerf Rival Hades is great in its performance and is swift and great in shooting and brings pleasure to the players using it.

For instance, once the player has primed the blaster, its priming handle is locked into its position and remained fixed there, not bothering the player for the rest of the time. It stays locked until the player pulls the trigger needed for firing.

The entire process of priming the gun and firing it is very smooth and easy and does not consume the player’s time. Whether the player chooses the single fire mode or the slam fire mode, both are solid in their functioning.

Moreover, the Nerf Rival Hades has a special un-jamming button on one of its sides that allows the players to unlock the priming handle of the blaster in case they face a jamming issue. But the reality is that this blaster is so efficient that the jamming issue seldom happens.

There is another interesting feature of the blaster that its muzzle at the front is mainly composed of 4 small barrels that can rotate. Once the player primes the blaster, these 4 barrels rotate and help pull the next round from the integrated magazine.

The more interesting fact is that out of these 4 barrels, only one is capable of firing the rounds, and it is the bottom barrel. This means that the other three barrels are non-functional but make the front section of the blaster look cool because of their rotation. 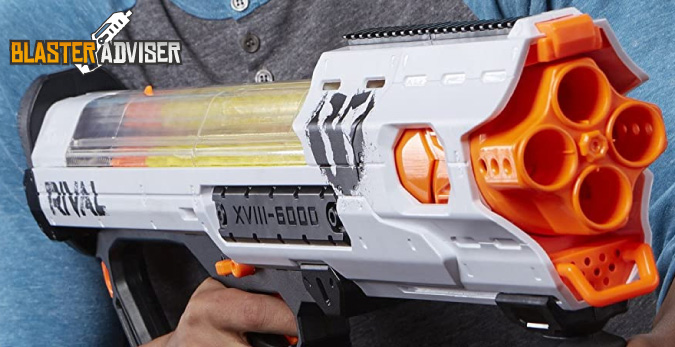 For someone who has been using this Nerf blaster, I can vouch for its ergonomic build and great design. Its grip is great, and the priming, loading, and firing processes are super-efficient and smooth.

The blaster is also really lightweight so the player does not get tired or feel difficulty in the arena in handling the gun. Do not get deceived by the gun’s large size because it is bigger due to its magazine but is robust and a great product to use.

The blaster is made up of plastic which adds to the longevity of the gun and its sturdiness. It also makes it quite harmless to be used by anyone.

The gun arrives unassembled in the package and the player has to assemble the gun by themselves, but no need to worry about it. The package includes a detailed guide manual that can help you arrange the right pieces together.

However, in all this process, you have to be careful and keep the Nerf blaster away from kids younger than 3 years of age because there are chances of them swallowing small parts of the blaster before assembly.

All in all, it is a great Nerf gun that has all the great qualities any player can look for in a blaster. My personal experience with this one has been brilliant and this is why I have left this detailed review that is of help to anyone looking forward to a guide before making the final decision.

This is one of the greatest Nerf guns that Hasbro has ever introduced to the world of blaster guns. You do not have to worry about piling up batteries in a corner of your room to operate this blaster as it has a spring pump action and operates on your hand power. But do not be worried, it will not consume too much of your energy.

It is light in weight, and great in size, and it is because of the size that opponent players often get intimidates by it. However, it is not intimidating for the player operating it.

It is ergonomically built and in case your hands sweat whilst running in the arena, do not worry about losing your grip over the blaster because its ergonomic material with dry up your hands real quick and help you shoot your opponents no matter what the situation is.

I am hopeful you will find this guide helpful. Thank you for reading!