The Nerf Rival series truly is revolutionary in the truest sense. The blasters it has are too amazing, and their features are up to the mark. The performance, quality, looks, and even color selection – everything is top-notch. Each new blaster comes up with something truly magical and great that shows how advanced and updated blasters are in this series.

Nerf Rival Nemesis MXVII-10K is a high-performing blaster that is fully automatic. If you are accustomed to the Perses and Prometheus models, you will realize this Nemesis model is a perfect trailblazer for those two models as well.

You might be surprised to learn that Nerf Rival Nemesis MXVII-10K has acquired royal status in the Nerf series. Whereas it sounds a bit overblown but the truth is, once you use this blaster yourself, you fully believe in and support the status it has earned since the time it got released.

In the following guide, I am going to share my experience in Review of the Nerf Rival Nemesis MXVII-10K in detail and also review all its features. I will also be shedding light on its pros and cons so you can make up your mind about this product without my influence.

Hasbro released Nerf Rival Nemesis MXVII-10K in 2017 and they were very smart with the name selection of this blaster. I believe the name has a lot to do with the post-release status of a blaster. They named this blaster after the name of a Greek goddess of divine retribution and revenge and when you play with this blaster, you realize how it lives up to its name.

This blaster is an extraordinarily powerful conveyor blaster and a flywheel. To say that it is a leading blaster in the Nerf series will not be wrong.

The firing system of the blaster is fully automatic and has a great firing capacity. It has the ability of high-impact rounds as well, and these rounds are loaded with a specially purpose-built hopper system.

In short, not a single feature of this blaster, no matter how tiny it is, disappoints you. I had a great experience with this blaster and keep going back to it again and again, and I am sure you will experience its awesomeness too.

Except there is one tiny drawback of this blaster and it is that it required 6 D-batteries to function and these batteries are not included in the package. So you have to get batteries separately. But there is a bright side to this aspect as well. This blaster can be powered with a Nerf Rival Rechargeable Battery pack that you can get whenever you want and never worry about your batteries running out of power. 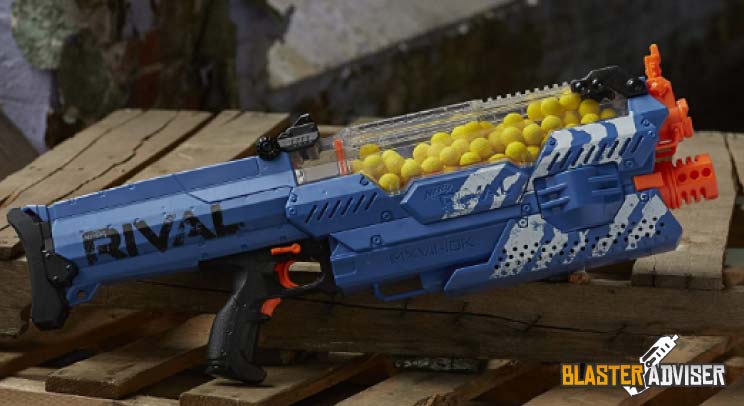 In the following section, I shall be exclusively focusing on the main features of this blaster and how it stands apart from its counterparts.

As the name of the blaster is the exception, so is its size. It has been built in a relatively larger size. And when I say big, I truly mean it. The best part is that this blaster is big in an awesome way. The design itself makes a statement that I am big and intimidating, so you better watch out and be careful.

The blaster is a bit chunky at the front but you do not have to worry about handling it because it has a big stock at the back that enables you to balance the weight of the blaster on your shoulder. This balance works pretty fine as well. It surely is a big blaster but it is not too heavy or uncomfortable to handle so you do not have to sweat about it.

There are 4 sling points on the blaster. Two points are located on the front, close to the barrel and one sling point is in front of the trigger. One point is at the back. Two of these 4 points are ambidextrous. The main function of these points is to help you carry the blaster in a way you like, whether vertically or horizontally.

The layout and grip of the blaster trigger are comfortable and not at all bulky as its design and size might suggest. It does not matter whether you are left-handed or right-handed, this blaster works amazingly for everyone.

The grip of the Nemesis functions pretty well for players from all age groups, whether kids or adults.

The hopper of the Nemesis is insanely big, which means this blaster has great staying power. This also makes it compatible with High-Impact Rounds, so it can easily carry about 100 rounds at a time which is way too good for a blaster.

Reloading is also on-point. The hopper chamber is detachable as is not the case with many other blasters. So you can easily reload the ammunition and save your time and energy.

Another great feature about Nemesis is that in case you forget to shut the small entry door located at the top of the hopper, the blaster simply will not shoot and redirect you to close it first

So it can be said that it is a neat and safe blaster to use and play with. And it also guarantees great fun.

Not only this, but this blaster also has two integrated, flip-up sights. These look great and are fun to have but the truth is that they are of not much value to the blaster or make its performance efficient.

However, if you are having a long gaming session, then the internal great capacity of this blaster helps you stand your ground. Because if you are going to use 100 High-Impact rounds, of course, you will make it.

Its firing option is limited to being only fully-automated and no, this is not a complaint because it is so much fun. The blaster has 3 triggers – primary, lock, and acceleration, and all are located closely making the overall functioning of the blaster neat and smooth.

If you have no prior experience with a fully automatic blaster, then you surely are in a treat with Nemesis. You do not have to pump or slide to prime it, because it is a flywheel blaster. That means that it has an acceleration trigger that RVs the mechanism that fires out the rounds.

The whole mechanism is powered by 6-D batteries so you can have long gaming sessions without worrying about a single factor. Moreover, you can have the Nerf rechargeable battery pack, as I mentioned above, and never worry about the batteries’ power again as it comes in handy.

Most of the Nerf Rival blasters have a conveyor belt feeding mechanism which is quite neat and cool in its functioning. The Prometheus and Perses in particular function on that mechanism. The conveyor belt mechanism is about pulling rounds from the hopper and then feeding into the barrel which makes the ammo available to be shot at opponents at the behest of the player.

So this blaster is advanced and efficient by having that sharp and neat mechanism that saves your time and energy by a great margin.

It is also important to point out that sometimes you need to shake the Nemesis blaster which helps it to allow the rounds to be easily sucked into the funnel of the blaster. Whereas this might be considered a con, in all honesty, it is a very minor inconvenience that is present in a very great and awesome blaster.

In case the Nerf Rival Nemesis faces a jam issue, which happens very rarely, you can pull out the whole hopper chamber and gain complete access to the internal mechanism of the blaster. This also helps you to clear out any jams that you might be facing.

I also need to mention that this blaster is not for the ones who might have a faint heart. If you are a truly competitive Nerf game player, only then should you use it because it transforms into a warrior mode and the opponents do not stand a chance.

Its shooting is precise and accurate for its great range which also adds to its awesomeness. In simple words, the blaster has a great many advantages and there is simply no reason to not add it in your Nerf equipment collection.

You might have guessed from the review that it is one of my favorite Nerf blasters, and rightfully so.

I hope you will find this guide helpful in learning about Nemesis. Do let me know in the comments what you think about it.

Review of the Nerf Ultra One Blaster 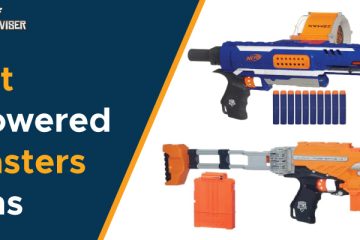 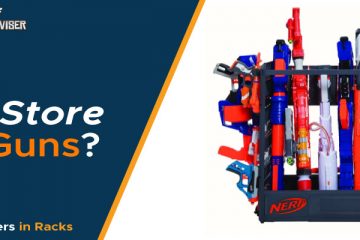 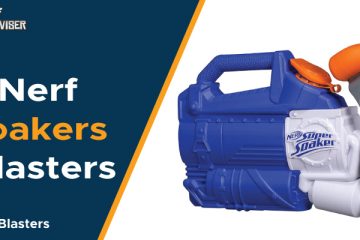